So a few weeks ago I had the pleasure of attending ACen for about the 5th or 6th time in my life. I made two costumes for this year. One was for myself and one was for my best friend. We both went has League of Legends characters. I went as Caitlyn. 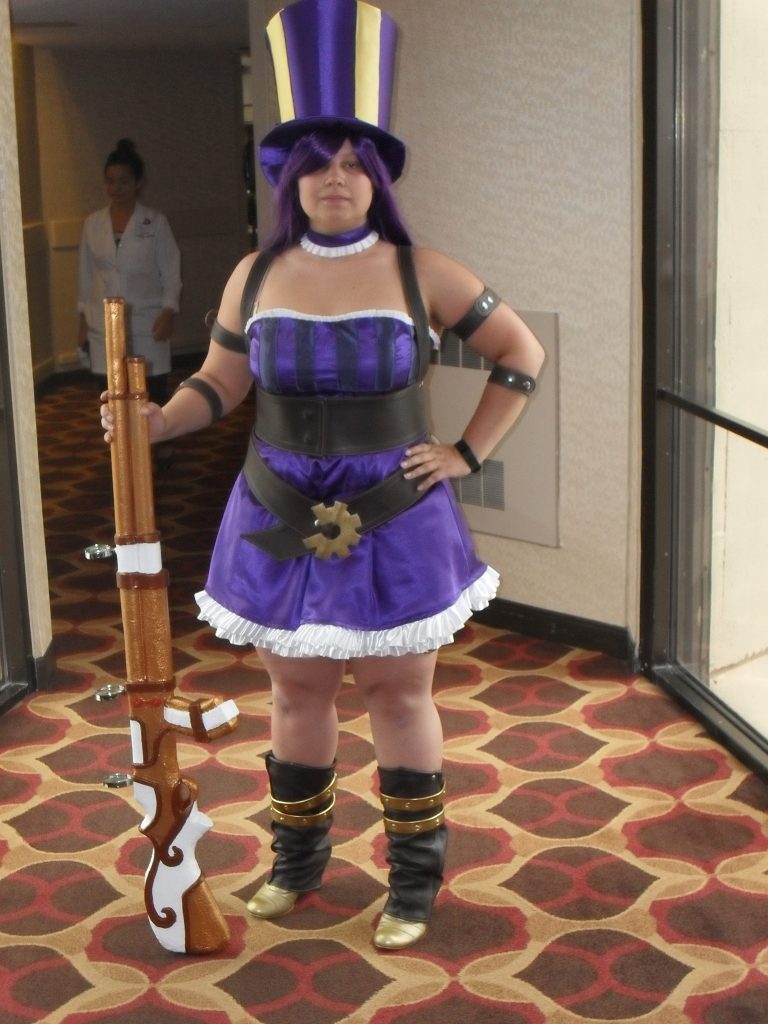 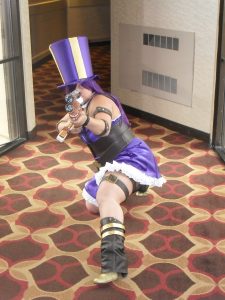 This costume took two years to make. Not physically to make but the first time around I short changed my time and was not able to complete it on time and in a rush shortened it too much was unable able to wear at all. Ignore my facial expressions in these photos it had been a long morning (all nighter painting in the room) followed by my hat being a little too snug on my head with the wig so I was suffering after 4 hours in costume.

The dress was made using Simplicity pattern 1606. I took the halter version and just never added the straps. I used royal purple satin for the main layer of the dress then added in some darker purple/blue for the chest stripes. The under layer with ruffles was your standard white cotton blend, while the ruffles sewn to that were white satin.

Making Caitlyn’s hat was another matter all together. I did have to consult my brother on this as he had made the perfect shape for a hat just smaller. Gauntlets. I used the same equation only larger to create the hat. Then covered the foam in the same satin before connecting all pieces together for clean seams. The only downside we found out later is I measured this out to my head not to my head with a wig on. Big difference a few inches will make we came to find out on first day of costuming.

All of the leather work was commissioned from a friend. So it is all real leather. Only a few adjustments will need to be made to these but overall worked very well and boy do you work up a sweat in leather and satin. The boot covers were also part of the leather commission from Bound Edge Leather Co.

The gun was made from a block of foam and some foam tubes. There were aluminum rods shoved down the center to reinforce the foam in case of bumping and breakage. Nothing like a broken gun to ruin your weekend. My girl friend helped me by repainting this to a high shine steam punk bronze color and adding in all the detail work I missed the first time around. Gun was covered in wood glue before being painted. I then used magnifying glasses as the scopes on her rifle. Did burn my knuckle in the sun on that Friday of the con.